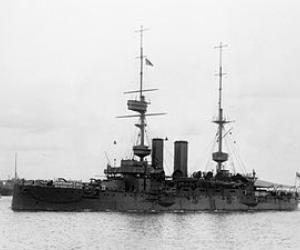 HMS Bulwark belonged to a sub-class of the Formidable-class of pre-dreadnought battleships of the Royal Navy known as the London class. Entering service with the Royal Navy in 1902, she sailed with the Mediterranean Fleet until 1907. She then served with the Home Fleet, for a time under Captain Robert Falcon Scott. After a refit in 1912, she was assigned to the 5th Battle Squadron.
Following the outbreak of the First World War, Bulwark, along with the rest of the squadron, was attached to the Channel Fleet, conducting patrols in the English Channel. On 26 November 1914, while anchored near Sheerness, she was destroyed by a large internal explosion with the loss of 736 men. There were only 14 survivors of the explosion and of these 2 died later in hospital. The explosion was likely to have been caused by the overheating of cordite charges that had been placed adjacent to a boiler room bulkhead.

From the beginning of the First World War in August 1914, Bulwark and the 5th Battle Squadron, assigned to the Channel Fleet and based at Portland upon the outbreak of war, carried out numerous patrols in the English Channel under the command of Captain Guy Sclater.
From 5 to 9 November 1914, while anchored at Portland, Bulwark hosted the court martial of Rear-Admiral Sir Ernest Charles Thomas Troubridge for his actions during the pursuit of the German battlecruiser SMS Goeben and light cruiser SMS Breslau in the Mediterranean Sea in August 1914. On 14 November 1914, the 5th Battle Squadron transferred to Sheerness to guard against a possible German invasion of England.
A powerful internal explosion ripped Bulwark apart at 07:50 on 26 November 1914 while she was moored at Number 17 buoy in Kethole Reach, 7.4 km west of Sheerness in the estuary of the River Medway. Out of her complement of 750, no officers and only 14 sailors survived, two of whom subsequently died of their injuries in hospital. Most of the survivors were seriously injured.

The only men to survive the explosion comparatively unscathed were those who had been in Number 1 mess-deck amidships, who were blown out of an open hatch. One of these men, Able Seaman Stephen Marshall, described feeling the sensation of "a colossal draught", being drawn "irresistibly upwards", and, as he rose in the air, clearly seeing the ship's masts shaking violently.
Witnesses on the battleship Implacable, the next ship in line at the mooring, reported that "a huge pillar of black cloud belched upwards... From the depths of this writhing column flames appeared running down to sea level. The appearance of this dreadful phenomenon was followed by a thunderous roar. Then came a series of lesser detonations, and finally one vast explosion that shook the Implacable from mastheads to keel."
In terms of loss of life, the incident remains the second most catastrophic accidental explosion in the history of the United Kingdom, exceeded only by the explosion of the dreadnought battleship Vanguard, caused by a stoke-hold fire detonating a magazine, at Scapa Flow in 1917.

The destruction of Bulwark was also witnessed on board battleship Formidable, where "when the dust and wreckage had finally settled a limp object was seen hanging from the wireless aerials upon which it had fallen. With difficulty the object was retrieved and found to be an officer's uniform jacket with three gold bands on the sleeves and between them the purple cloth of an engineer officer. The garment's former owner had been blasted into fragments." A naval court of enquiry into the causes of the explosion held on 28 November 1914 established that it had been the practice to store ammunition for Bulwark's 6 in (150 mm) guns in cross-passageways connecting her total of 11 magazines. It suggested that, contrary to regulations, 275 six-inch shells had been placed close together, most touching each other, and some touching the walls of the magazine, on the morning of the explosion.
The most likely cause of the disaster appears to have been overheating of cordite charges stored alongside a boiler room bulkhead, and this was the explanation accepted by the court of enquiry. It has also been suggested that damage caused to one of the shells stored in the battleship's cross-passageways may have weakened the fusing mechanism and caused the shell to become 'live'. A blow to the shell, caused by it being dropped point down, could then have set off a chain reaction of explosions among the shells stored in Bulwark's cross-passageways sufficient to detonate the ship's magazines.