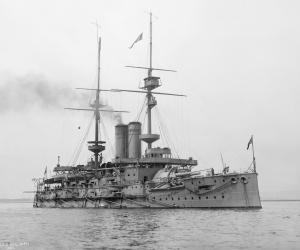 HMS Goliath was a pre-dreadnought battleship of the British Royal Navy and a member of the Canopus class. Intended for service in Asia, Goliath and her sister ships were smaller and faster than the preceding Majestic-class battleships, but retained the same battery of four 12-inch (305 mm) guns. She also carried thinner armour, but incorporated new Krupp steel, which was more effective than the Harvey armour used in the Majestics. Goliath was laid down in January 1897, launched in March 1898, and commissioned into the fleet in March 1900.

The ship was deployed to the China Station from her commissioning until 1903, when she returned to Britain; she was sent back to East Asian waters, but while en route was reassigned to the Mediterranean Fleet. In early 1906, she was transferred to the Channel Fleet, followed by a stint in the Home Fleet starting in early 1907. She was sent to the Mediterranean a second time in 1908, and later returned to the Home Fleet in 1909, before being decommissioned in 1913. With the outbreak of the First World War in August 1914, Goliath was mobilised into the 8th Battle Squadron. She initially served as a guard ship in Loch Ewe, one of the harbors used by the Grand Fleet, before escorting the crossing of British troops to Belgium in late August.

Goliath then took part in operations against German East Africa, participating in the blockade of the German light cruiser SMS Königsberg in the Rufiji River. From March 1915, she was part of the Dardanelles Campaign, and remained in support of the landings at Gallipoli in April. On 13 May 1915 Goliath was sunk in Morto Bay off Cape Helles by three torpedoes from the Ottoman destroyer Muâvenet-i Millîye. Out of her crew of 750, 570 were killed in the sinking.

Son of William and Mary Barron née Neville of Ballyhack, Arthurstown. When torpedoed, the HMS Goliath blew-up and capsized immediately taking 570 of her 750 crew including the captain to a watery grave. (Enniscorthy Guardian 1915)

Son of John and Mary Dempsey of Bride St, Wexford.